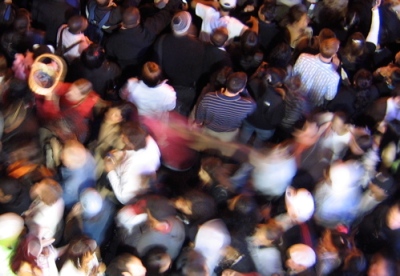 We’re living in the epoch of the individual. One of the primary narratives of the last few centuries has been the continual expansion of civil liberties and democracy, and the desire to stand out is engrained in us from the moment we’re born. But today, as the long-term future of society is being placed at risk for the sake of short-term prosperity, we’ve begun to wake up to the necessity of protecting common needs from individual ones. Having spent so long ensuring the well-being of the singular, we’re just now beginning to rediscover that the plural holds its own special power – greater, as they say, than the sum of its parts.

It’s a basic tenet of biology that life is comprised of layer upon layer of discrete entities working together to make larger units: atoms gravitate together to form molecules, which combine into proteins. Instructed by our DNA, these proteins in turn create organelles, cells, tissues, organs and organisms. Traditionally, that’s where biology ends and the humanities take over. But there’s no reason the pattern should stop there. What if we began looking for signs of life beyond the physical body? In this sense, communities wouldn’t merely be collections of individuals, but entities in their own right, with their own needs, values, and cycles that transcend those of any one member.

This hypothesis has been dubbed emergence, and it has a dedicated following among biologists, programmers and chaos theorists (there’s even an entire journal dedicated to it). Examples of emergence abound in the natural world: unicellular slime molds group together and act as one organism when food is scarce, termite mounds self-regulate their temperature far better than any LEED-certified building, and flocks of birds in perfect formation change direction on a dime.

There’s plenty of self-organizing systems to be found in everyday life, as well, from traffic patterns to the stock market. But we’re just starting to understand the way these systems affect our well-being, and we’re beginning to realize that they could be a whole lot smarter. Take the corporation, a system that’s already legally recognized as an individual. Although corporations have become an enormously successful species in their own right, they don’t seem to be serving us, their creators, very well at all. When viewed as a single organism, our sprawling, homogenous, consumption-obsessed global economy suspiciously resembles a parasite – and a grossly inefficient one at that.

What would it take for us to become less like a virus and more like a colony of ants? For one thing, it entails an understanding of the connections between things just as much as the things in themselves. Rather than trying to create sustainable objects, we should be designing sustainable patterns and self-regulating networks. The web, especially the web 2.0, is a testament to the the power of emergence in action, and can provide us with insight into bringing evolving systems into the real world. How might our political system be reenvisioned as a democratic social network? How would we do business differently if we saw each firm as a member of a market-wide species?

Needless to say, the implications of the social organism are profound, and not entirely comfortable. Thinking of ourselves as mere cells in a larger intelligent creature is a serious mental leap, and it calls into question some of our most basic notions of identity and free will. But increasing our understanding of human interconnectedness doesn’t erase the enormous potential in each person. As we guide our shared world towards a more secure future, we’ll need to strike a healthy balance between competition and collaboration, the “I” and the “we”. The epoch of the individual, then, is far from dead – it’s just evolving into something else.

3 thoughts on “The Social Organism”