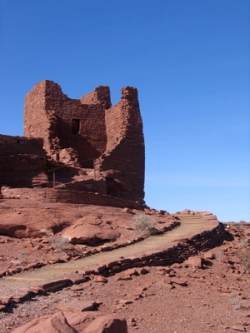 I’m not quite sure what the PC term is these days for today’s holiday – I’ve been calling it Remembering Indigenous Peoples day, or RIP for short. But whatever you want to name it, the holiday has more significance for me now than it ever has before: the more I learn about native American societies, the more I’m astounded by their sophistication and seamless integration with the landscape around them. In honor of RIP Day, I’d like to share a couple of interesting facets of Native American cultures that I’ve picked up in the last year.

Malcolm Margolin’s essay “The Human-Nature Dance: Humans as a Keystone Species” explains the intricate system of land management employed by Native Americans on the West coast, a system that went completely over the heads of early missionaries:

According to the Europeans’ naïve view, Indians had lived in California for thousands of years without altering the land. But the landscape discovered by the newcomers was not what natural California looks like… to a large extent ‘primeval’ California was a landscape managed by human beings in a very particular and conscious way.

Just like us westerners, Native Americans fundamentally altered the environment around them. The difference is that, through the wisdom accrued from inhabiting a place for centuries, these alterations weren’t just for their own good but rather worked to the benefit of the entire ecology. Setting controlled burns, carefully managing animal populations, coppicing forests for basketry, and digging for roots in a way that propagated the plant, Native Americans acted as “keystone species” in their environment, masterfully orchestrating the complex web of life around them.

Another lesson to be gained from our continent’s original inhabitants is their emphasis on communalism. While we non-native Americans pride ourselves on our individual freedom, Native Americans prided themselves on their community. Their status as individuals was less important than their role within the tribe, an arrangement that encouraged societal stability. This humble acceptance of one’s place in the greater framework – something we might label today as a violation of human rights – was in fact the very backbone of Native American culture. Here’s a tongue-in-cheek passage from Edward Abbey’s classic Desert Solitaire:

The average Navajo suffers from a handicap more severe than skin color, the language barrier or insufficient education: his acquisitive instict is poorly developed. He lacks the drive to get ahead of his fellows or to figure out ways and means of profiting from other people’s labor. Coming from a tradition which honors sharing and mutual aid above private interest, the Navajo thinks it somehow immoral for one man to prosper while while his neighbors go without… shackled by such primitive attitudes, is it any wonder that the Navajos have not yet been able to get in step with the rest of us?

What’s the lesson to be learned here? The strange ways of the People Here Before Us might make interesting dinner conversation, but does it hold any practical value? Of course it does. No, we’re not about to start making all our furniture from willows in the backyard. But we’ll never be able to truly collaborate with nature until we develop a rootedness, a deep understanding of the natural patterns and flows in a given place. And we might not be letting go of capitalism anytime soon, but we could stand to learn a lesson or two from Native American traditions of mutual caring and modesty.

So, on RIP day, take a moment and reflect on who might have graced the place where you are a thousand years ago – and what they might have to say about what’s there now. The wisdom of the ancients is still all around us. It’s just waiting for us to listen.

One thought on “RIP: the People Here Before Us”