Anyone remotely familiar with U.S. agriculture has heard the story: for more than 100 years, small farms in America have been in decline. Indeed, even as the total number of farmers has fallen, the average acreage for farms has increased. But what’s not often mentioned is that the smallest farmers, those operating on between one and 50 acres, aren’t the ones who have taken the largest hit. Rather, it’s the midsized farmers (between 50 and 500 acres) who have suffered most from the trend of farm industrialization.

This was pointed out to me last night at a panel last night on the 2007 Farm Bill, held at NYU’s Wagner School of Public Policy. Dan Barber, a chef and executive board member of the Stone Barns Food and Agriculture Center in upstate New York, noted that for those farmers small enough to throw their wares in a pickup truck and head down to an NYC farmers market, these are not the worst of times. Similarly, of course, huge industrial farmers are doing fairly well, thanks to commodity crop subsidies and the economies of scale that come with their business model. 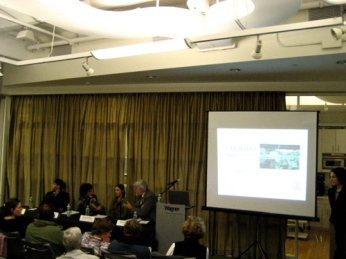 Mid-sized farmers, by contrast, are often unable to compete at either the micro-scale of small farmers markets of the massive scale of commodity crops. Many need wholesale markets for their products in order to make ends meet, and until recently, these have been lacking in places like New York State. According to Christina Grace, who manages Urban Food Systems Programs for the New York State Department of Agriculture and Markets, getting more local food from midsized farmers into New York City can be accomplished through two main avenues: developing a wholesale infrastructure so that restaurants and busineses can purchase in bulk from farmers, and increasing demand for local food across the population.

Grace’s department is tackling both of these issues through state programs. After conducting a study, they’ve set up a temporary wholesale market at the Fulton Fish Market in NYC. And through efforts like the “Adopt a Bodega” program, they’re trying to get local foods into neighborhood grocery stores. Under that program, elementary school students are given local fruits and vegetables as snacks at school, and then encouraged to seek out those foods at their local corner store. If the store doesn’t carry them (as is often the case), the idea is that a critical mass of pestering students and parents will prompt the store to change.

Of course, the other way to get local foods into New York City is to simply grow them there. Interstingly, the 2007 Farm Bill contains more funding for urban agriculture than past bills have contained, although it’s still not much. The House version includes $30 million in discretionary funding for urban agricultural projects like the Added Value farm in Red Hook, while the Senate version contains $10 million in mandatory aid for such projects.