Freeganism, the philosophy of non-participation in the capitalist economy through minimization of what one buys, has been getting heaps of press lately, with outlets as high-rolling as the New York Times and the Washington Post running pieces on the subject. But while much recent media coverage focuses on what it’s like to live as a freegan, I’m interested in the forces that freegans are reacting to, and the realities that allow them to sustain their lifestyles. In this four part series, I’ll be examining these questions by looking at food waste, disposable culture, modern work, and the state of community in America.

One night in late November, in the courtyard of a community center in Bushwick, Brooklyn, a bread mountain was constructed. It measured about four feet tall and 10 feet in diameter, the product of a few nights of dumpster diving throughout New York City. Hundreds of rolls, pumpernickel loaves and baguettes lay stacked in various states of edibility, but like so much wasted food in New York City, they would never make it to the people that needed them most.

In 2003, the most recent year for which data is available, businesses in New York generated over three million tons of organic waste. Although it isn’t known how much of this was food waste, the much-publicized success of freeganism in the city suggests that most dumpsters contain much more than just coffee grounds and banana peels. Indeed, on the same evening that I came upon the bread mountain in Brooklyn, the community center hosted a freegan benefit party, with a buffet spread featuring chili, vegetables and dip, and various breads and cookies, all of which had been scavenged from the trash.

There’s no way to tell precisely how much edible food winds up in New York trash cans, particularly since the term “edible” is so subjective. Nevertheless, it’s clear that much more would go to waste if not for the organization City Harvest, which uses a fleet of 16 trucks to rescue over 2 million pounds of wasted food in New York City annually, and transfers it to community centers and homeless shelters. According to the organization’s website, there are over 1 million people in the city who do not get enough food to meet their basic needs.

For Jesus Ortiz, who has been driving a City Harvest donation truck for more than 5 years, such figures are all too familiar. “We get up to 1300 pounds of food per day on city routes, and our base in Brooklyn gets up to 6000 pounds,” he told me, as we set out on his route one recent morning.

Whole Foods gave these bananas to City Harvest for donation.

From the perspective of a restaurant or grocery store, wasting food is effectively throwing away money. So how can there be so much waste? One stop on Ortiz’s route is the Institute of Culinary Education, where we picked up extra cilantro, carrots, and several other vegetables. “This is food that is not quite high enough in quality for the students who pay $25-30,000 per year to go here,” said the chef who gave Ortiz his load. “But it’s still all perfectly good.

I heard similar explanations from at several food providers we visited. Indeed, it seems that for many of them, appearance has replaced abundance as the main food-related concern. There are some businesses with inefficient ordering systems, and for them, working with City Harvest can provide a much-needed wakeup call.”When organizations sign up with City Harvest, they often start to realize that they’ve got a problem, which makes them ask ‘Who’s ordering all this stuff?’” said Ortiz.

Still, a single organization can only do so much. Jennifer McLean, City Harvest’s Director of Program Operations, noted that liability prevents the group from accepting any food that has been damaged or previously served, including things like restaurant hot bars or leftovers from corporate lunches. “Many of us go into a bodega near the end of the day and think of what a shame it is that all that food will be wasted, but unfortunately, we can’t take it,” she said. 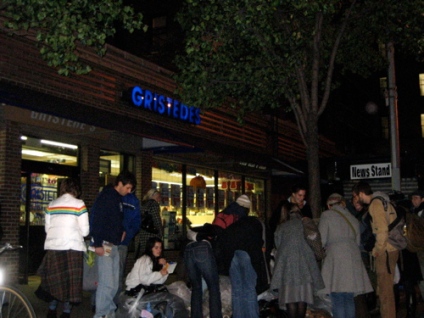 NYU students dumpster dive outside of a Gristedes supermarket in Greenwich Village.

A recent evening out with a couple of New York City freegans reinforced McLean’s point that even a well-run organization like City Harvest can have only a limited impact on reducing food waste. We traversed several markets and eateries throughout Greenwich Village, and one of our greatest hauls came at Gristedes, a New York supermarket chain that doesn’t donate any food to City Harvest at all. We pulled everything from frozen pies to iceberg lettuce from their trash bags, but we also did quite well at several restaurants that actively donate to the organization. At the French Bistro Le Pain Quotidien, we salvaged bags full of muffins and croissants. The Sullivan Street Bakery, which is also a City Harvest partner, is notorious among freegans for its remarkable quantities of wasted bread.

“Most stores always order more than they need,” said Janet Kalish, a freegan and high school Spanish teacher. “They do it to perpetuate the myth of abundance, the idea that there is always more than enough.”

You won’t find this in the mission statement of any grocery store, many of which feature sophisticated computerized systems that strive to match supply with demand by re-ordering items automatically when they are sold at the register. “Why would we waste?” asked Norbert Jones, the assistant manager of a Dagostino’s supermarket in Greenwich Village, when I inquired what the store threw away most often. “It’s bad for business!”

Nevertheless, the huge volumes of food involved in the modern grocery business make it all but inevitable that some inefficiency will surface. And it’s hard to ignore the lengths that many businesses will go to in order to create the illusion of a cornucopia. Bakeries advertise bread “baked fresh, all day,” while grocers heap exotic produce in precarious piles and lay out epic spreads of prepared food. Unless appearance becomes less vital or stores become much smaller, it’s likely that freegans will continue to live off of our food supply system for a long time to come.

And for now, they’re enjoying it. As student and freegan Arthur Crosman told me, “Sometimes I go inside the stores where I’ve been dumpster diving and see how much the stuff costs that I’ve been getting for free!”

5 thoughts on “The Roots of Freeganism Part I: Food Waste”