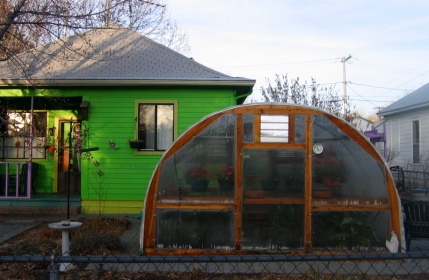 My home here in Prescott is in a low- to middle-income neighborhood about a mile from downtown.  The historically Mexican area is bordered on three sides by a creek, and this geographic isolation has allowed it to escape the pressures of development that are sweeping through the rest of town. But recently, the neighborhood has begun to see a transformation of a completely different sort: Prescott College students and other green-leaning residents have begun to settle in the area’s small, cheaply built tract homes and retrofit them for a green lifestyle. Started by 30-something permaculture teacher Andy Millison, the movement has taken off so much in the last few years that locals have (somewhat uncreatively) taken to calling the area the “Eco-Hood“.

But London this ain’t – the Eco-Hood has nary a hybrid or solar panel in sight. With a decidedly low-tech, DIY approach, these green homesteaders are instead investing in chickens, rainwater catchment systems, straw-bale insulation, and passive solar-heated greenhouses; some have even gone so far as to abandon their house and live in yurts or sheds in their yard. There’s an almost palpaple competition amongst the eco-hooders to reduce their consumption of energy, imported food, and material possessions.

Even within the sustainability movement, the residents of the Eco-Hood are clearly on the fringe, living a near-ascetic lifestyle in the name of the environment. But as unique as it is, there’s one part of this story I’ve seen before: though Prescott is worlds away from my Brooklyn apartment, the demographic shift underway in the Eco-Hood – young alternative white folks moving in to a low-income minority community – is uneasily familiar. Am I living in the first neighborhood in the country to undergo “greentrification”? It’s too soon to say. The ultimate success or failure of the Eco-Hood will rest on how successful the new residents are in crossing the substantial cultural divide that separates them from their Mexican immigrant neighbors. Sustainability is to a large extent about community, and if the eco-homesteaders are ignoring the issues of 80% of the neighborhood’s residents, they aren’t truly building one.

The Eco-Hood could be the first signs of a potent movement – or it could peter out within the year, remembered only as a naive experiment in the early days of the Green Rennaissance. But either way, the urgent desire of its residents for a healthy, creative, and self-sufficient lifestyle should be an inspiration to us all. For all the fanfare stirred up by the green movement, we still live in a society dominated by consumerism and its rampant excesses. In a vicious circle, our luxuries become necessities as we’re indundated with yet more luxuries to desire. At some point, this cycle has got to be broken. The Eco-Hooders have done it. Can the rest of us?

2 thoughts on “Life in the Eco-Hood”