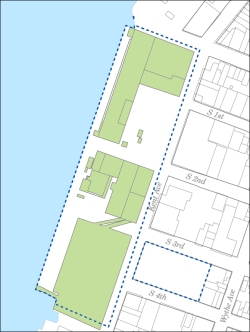 There’s a big empty industrial complex down the street from my apartment called the Domino Sugar Factory. Nobody tends to give it much notice; it’s just a row of empty buildings of in an out-of-the-way part of the neighborhood. But with the pressures of redevelopment creeping into the area, the six-square block waterfront site is a fast becoming a developer’s dream. With a project of this scale, the fate of Domino will easily determine the fate of the rest of the neighborhood – and right now, the view from where I live ain’t looking so good.

Domino is currently owned by a group called the Community Preservation Corporation, although, in typical developer doublespeak, community preservation seems to be the last thing on CPC’s mind: their plan calls for four several-hundred-foot towers, each one taller than the Williamsburg Bridge they’re adjacent to. Cumulatively, the uber-development would double the neighborhood population, stressing an already overtaxed sewer and transit infrastructure to the breaking point. And while the proposed 660 units of affordable housing are a plus, the impact of the other 1,750 units would likely displace thousands of the area’s current residents, as shopkeepers and tenants alike are booted to accommodate an influx of new wealth.

This sounds like the beginning of a sad story told a million times over. But it doesn’t have to be this way, especially with the buckling housing market making 2,400 new units seem fiscally questionable. There’s another way to develop Domino: one that listens to the needs of the surrounding community and ecology while still turning a profit. That’s the premise behind the Living Domino Project, the first cut of which I’ve shown below. From the ground up, the design I’m working on takes a whole systems approach, looking at how flows of water, waste and energy can be continuously cycled. I aimed to preserve as many of the existing structures as possible, with the new ones positioned to capture the riverfront views and take advantage of the site’s ample sun exposure.

Here’s an overview of how the project would take shape: 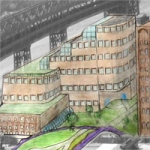 The southern two blocks of the site, as well as the upland block, would be devoted to a mixture of public open space and affordable housing. Ideally, Living Domino can match the 660 units promised by CPC, although this might mean building higher than the 8 or 9 stories I’ve sketched out. Similar to London’s heralded BedZed development, the housing units would have attached south-facing greenhouses to help heat the building and provide space for growing food.

The recently-landmarked refinery structure (and the iconic concrete-and-glass tower behind it) would serve primarily as an arts and cultural center, along the lines of the vision laid out at dominosugar.org. With hundreds of thousands of square feet between the two buildings, there could be extensive galleries and performing arts space, with plenty of room left over for a public library, offices, or a magnet school.

The roof of the refinery, covered in PV and solar hot water heaters, would serve double duty as a rainwater collector. After a storm, the water would flow down sculptural “green gutters” (thank you, USBK) and into a public fountain. From there it enters the site’s greywater system and could be used to flush toilets or water plants. 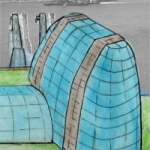 The northern two blocks of the site would house a Center for Urban Ecology, complete with a prototype vertical farm providing jobs and fresh local produce to the surrounding community. There’d also be an amphitheater, with the existing figure-8 footprint of two old storage towers as stage. Finally, the five blocks of public waterfront would accommodate a water taxi stop, a plaza, commercial tilapia culture, and a marina.

The Living Domino Project is, of course, quite embryonic, and the concepts presented here are likely to evolve greatly in the coming months. But more important than any of the specific features is the idea that the Domino site has massive potential for catalyzing a healthy, sustainable community. Rather than creating yet another agent of gentrification as CPC plans to do, the opportunity exists to create something truly groundbreaking, something that serves as a jewel of Williamsburg and the New York City waterfront. It’s not too late to make Domino come alive – but the clock is ticking.

2 thoughts on “The Living Domino”